This is another post challenging some of Walt Heyer's rubric about his failed transition.

In this post, I'm going to take apart and analyse Heyer's own narrative about his life as Laura a piece at a time, and expose the glaringly obvious problems that contributed enormously to the outcome of his attempt to transition, and explain why Heyer is not an example of typical transitions.

A big part of the motivation for writing this post comes from the following doozy of a comment on his blog: 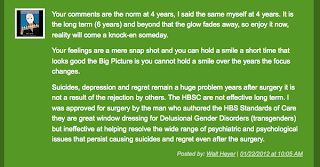 The key quotes I present will be taken from Walt's own autobiography Trading My Sorrows, Kindle Edition.


"I had the most wonderful feeling that the weight of the world had been lifted from me.  I was in a place of rest deep within me with no battles, no confusion, no tormenting thoughts.  This sense of serenity was unlike anything I had ever experienced before at any other time of my life.  I felt good, real good.  I was very much at peace, very happy.  At forty-two years old, I was finally a woman, or was I?" [Location 802, Chapter 7 "The Die is Cast"]

I would have expected Walt to feel pretty good immediately after waking up from surgery.  The first sign of trouble comes in the form of how Walt set things up prior to surgery, especially with his employer.


"My boss at Honda granted my request for two to three weeks of medical leave, which I said was for gall bladder surgery.  It wasn't a complete lie.  I needed gall bladder surgery, so I deliberately scheduled it back-to-back with the other surgery.  I figured it made a great cover-up.  I had gender reassignment surgery in Colorado on Tuesday, was released from the hospital and flew back home on Friday, then on Monday drove about a hundred miles to the other hospital for preoperative gall bladder preparations." [Location 802, Chapter 7 "The Die is Cast"]

There are a couple of key points I want to highlight here regarding Walt's GRS.  First, he wasn't up front with his colleagues at work about what was happening.  This is important, and sets him up for an immediate termination when he reveals his change of status to his bosses later.  Putting aside for a moment the very real issues of discrimination that transsexuals face in the workplace for a moment, Heyer's revelation of his change in status will be seen as a huge breach of trust by his bosses simply because he wasn't honest with them about the reasons for the surgery.

The second vital point that this reveals is that Heyer was clearly not living full time as Laura at the time he had surgery.  This is a very important point.  One of the most important aspects of transition is what used to be called "Real Life Test" or "Real Life Experience" in which the transsexual was expected to live 24/7 in their chosen gender for an extended period of time, usually at least a full year.  This means everything from home and social life to work without "switching back" to their previous role.  In my own opinion, if you can't live full-time in your chosen gender, then chances are you have a lot of thinking to do in order to sort yourself out before you are fully ready for surgery.

The other part that doesn't quite ring true for me is the idea of multiple major surgeries in such a short time.  My own experience of surgical recovery from GRS makes me wonder a little bit.  At three days after the surgery itself I was doing pretty well, but I was in no shape to drive any distance, much less undergo another surgery.  Perhaps Mr. Heyer has much greater stamina than I have, but I seriously question the rational judgment of someone who would do that to themselves.

While I don't know precisely what kind of documentation the surgeons would have required from a psychologist in 1983, clinic based programs such as those running at the Clarke were requiring at least a year living full time before hormones would be prescribed much less recommendations for GRS.  I'm not at all sure how Heyer got a recommendation for surgery if he wasn't living full-time as Laura to begin with.

Up next, I want to take a close look at Walt's described experience after a couple of years.

It was late 1985, about two years after my termination from Honda, a few months after arriving in the loving arms of the Thompson family, with about a year of sobriety.  Now I was realizing that I was a man wrapped in a woman's masquerade, a fake, a fraud, a mutilated man.  I did not fit anywhere.  My manhood had been surgically removed but I was not a woman even though my birth certificate said I was.  That was a lie.  I didn't want to continue living the masquerade.  With the support of a loving family and the help of Jesus Christ, I was truly, with every bit of courage, strength and ability, trying to restore my life to the man named Walt. [Location 1037, Chapter 9 "Time to Try"]

Bear in mind, this is all of two years after he had had surgery.  Barely at the halfway point to when he says in his comment I noted above that he claims he was still pretty positive about his surgical outcome.  From this comment in his autobiography, it sounds like he's already seriously considering detransitioning - not exactly a ringing endorsement of his life post-transition, in my opinion.  It indicates someone who was not stable in their transition for a variety of reasons.

... "With your history, there's no way that Toyota will employ you."  But he could hire me through a temporary agency to work for a Toyota national recall campaign.  I went for it, grateful to be back working with Bill, whom I admired, respected and considered one of my very best friends.  Bill was very happy he could help me.

I continued living a dual life:  Walt at work, Laura everywhere else.  It seemed that Laura was very territorial.  If I was introduced to something or someone as Laura, then I felt most comfortable always presenting as Laura in that situation.  When I met ben at my first AA meeting, I was Laura, so I felt most comfortable being Laura living in his home and at the AA meetings.  Ben didn't care if I left for work in the morning dressed as Walt.  We often laughed and joked about the absurdity of it.  [Location 1435, Chapter 12 "A Shocking Diagnosis"]


To be perfectly honest, what Walt is describing about living a dual life is what most transsexuals go through in the time prior to going "full time" (or beginning RLE if you prefer) and a full year prior to surgery.  There is an enormous amount of change happening during this time, and it's almost a full-time effort just to integrate all the pieces of your life into the social milieu of your chosen gender.  The final steps of going full-time, often involving workplace transition, are scary moments indeed.  Everything gets put on the line - career, relationships, stability, you name it.  It's hard.  If you can reintegrate yourself into a social setting where you have support during this time, chances are you'll have a much better outcome than if you simply do not.

The tragic thing is that it's quite clear that Walt/Laura could not successfully integrate themselves into society as either Walt or Laura.  Even more tragic is the fact that Walt discovered this after going through GRS.

None of this is a real surprise however when you consider what Walt writes about the time before he got GRS approved:


It's hard to describe how the desire for surgery takes over, especially when combined with the abuse of alcohol.  It took on the appearance of an obsessive-compulsive disorder, like a bulldozer pushing me relentlessly and single-mindedly toward surgery, while destroying every obstacle in its way.  Lying, cheating, and manipulating were my tools of the trade.*  I became expert at persuading everyone that surgery was the treatment I needed.  In my compulsion to have surgery, I plowed right through and over everyone and everything that stood in my way.  Too bad hindsight always comes too late for us to see how truly stupid our process is.  [Location 784, Chapter 6, "The Wheels Start Coming Off"] *emphasis added


Key points to note here:  prior to surgery, and actually throughout much of his time as Laura, Walt was struggling with alcoholism;  further he freely admits to lying in order to get GRS.

Alcohol addiction, like any other physical addiction, is a horrible condition to have to deal with.  It is unfortunate indeed that Walt was able to hide his drinking from his psychologist to a degree sufficient that he was approved for surgery without proving that he was sober first.  Like any other addiction, alcoholism can lead people to engage in some astonishingly irrational ways.

However, one cannot hide behind the cloak of alcoholism entirely.  GRS is a major decision, and by his own admission, Heyer engaged in thoroughly dishonest behaviour in order to get the approvals he needed.  There are many reasons that Walt Heyer's transition failed so spectacularly.  But the responsibility for those failures lies quite firmly in his lap.

His failures, and his story, are good cautions for those who would undertake transition to be honest with themselves.  Evaluate your motives carefully, think clearly and above all work honestly with a therapist while you are trying to adapt to a new gender role.  Therapy isn't mandatory, but it will help you ensure that you aren't about to make a Walt Heyer sized mistake with your life.
Posted by klf at 5:57 PM