Walt Heyer: No Discussions For You

Apparently Mr. Heyer isn't interested in actually discussing his views.  I took the time to make it over to his blog and responded to his post So Many Different Issues Drive The Transgender To Surgery, and pointed out how wrong he was to infer from a Swedish study that increased rates of mental health issues among transsexuals meant that transition and GRS were an inappropriate treatment.

He deigned to allow the first couple of comments to stay, but after that he has just been deleting them.  As shown below. 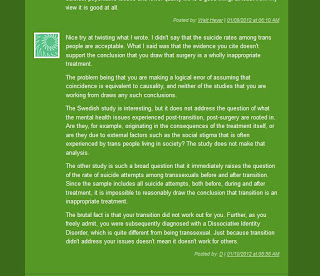 Step 2:  An hour later note that the commment has been removed: 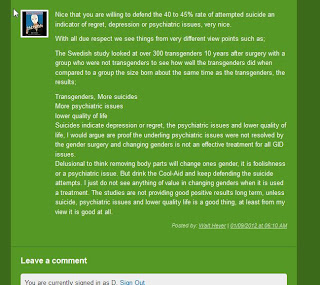 Roughly translated, like most other anti-trans wingnuts, Walt Heyer cannot, and will not discuss the problems with how they are mangling data when it doesn't suit their particular dogma.